As the UK’s largest FCA Authorised adviser to SMEs for hedging, Vedanta Hedging sadly sees many SMEs that have been subject to FX mis-selling and ripped-off by their banks or brokers when they are buying / selling FX. Vedanta Hedging exists, to ensure that derivative transactions such as FX purchases, are done at transparent and consistently fair margins.

The Sunday Times interviewed Vedanta Hedging about this: 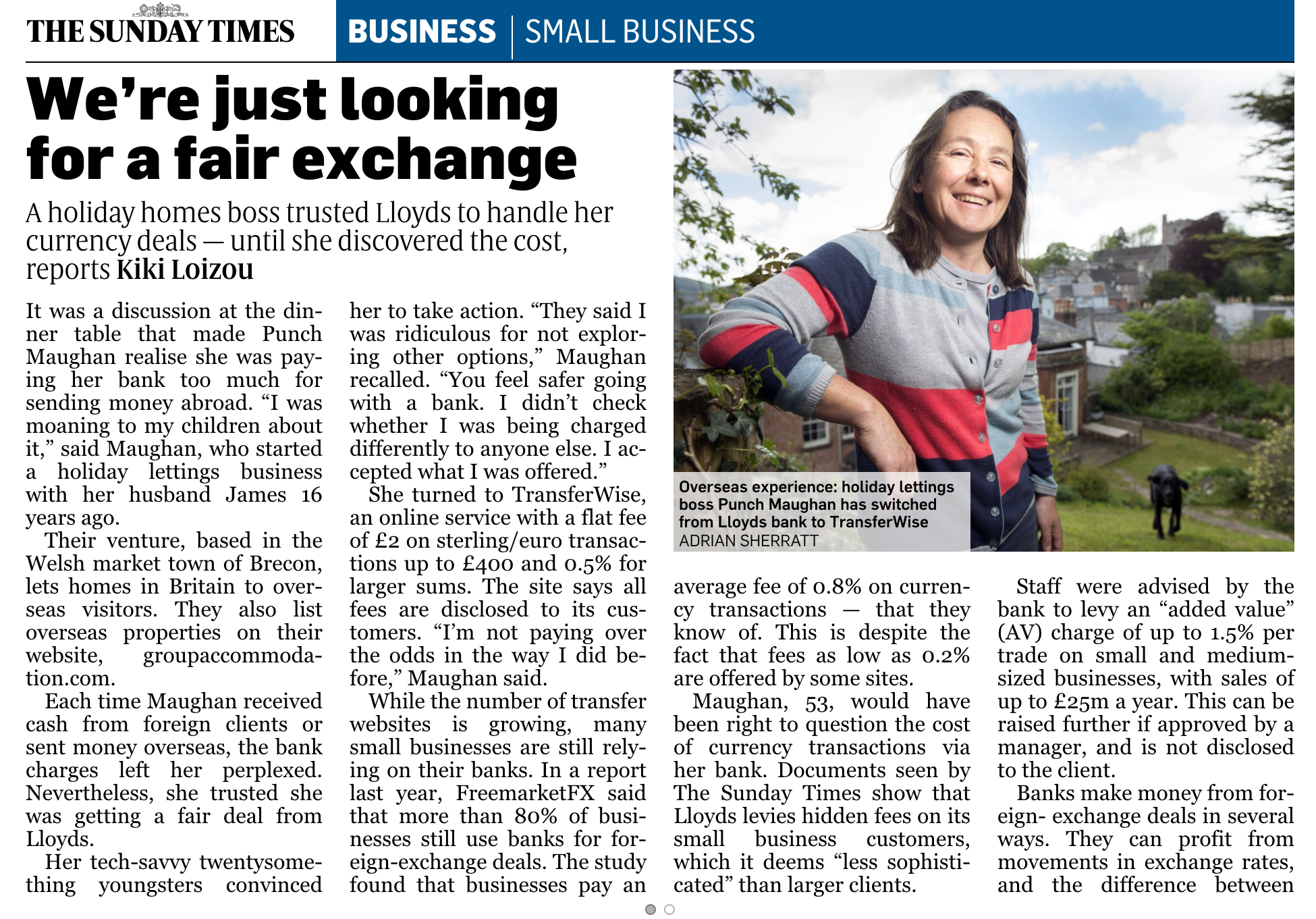 by Kiki Loizou
It was a discussion at the dinner table that made Punch Maughan realise she was paying her bank too much for sending money abroad. “I was moaning to my children about it,” said Maughan, who started a holiday lettings business with her husband James 16 years ago.

Their venture, based in the Welsh market town of Brecon, lets homes in Britain to overseas visitors. They also list overseas properties on their website, groupaccommodation.com.

Each time Maughan received cash from foreign clients or sent money overseas, the bank charges left her perplexed. Nevertheless, she trusted she was getting a fair deal from Lloyds.

Her tech-savvy twentysomething youngsters convinced her to take action. “They said I was ridiculous for not exploring other options,” Maughan recalled. “You feel safer going with a bank. I didn’t check whether I was being charged differently to anyone else. I accepted what I was offered.”

She turned to TransferWise, an online service with a flat fee of £2 on sterling/euro transactions up to £400 and 0.5% for larger sums. The site says all fees are disclosed to its customers. “I’m not paying over the odds in the way I did before,” Maughan said.
While the number of transfer websites is growing , many small businesses are still relying on their banks. In a report last year, FreemarketFX said that more than 80% of businesses still use banks for foreign-exchange deals. The study found that businesses pay an average fee of 0.8% on currency transactions — that they know of. This is despite the fact that fees as low as 0.2% are offered by some sites.

Maughan, 53, would have been right to question the cost of currency transactions via her bank. Documents seen by The Sunday Times show that Lloyds levies hidden fees on its small business customers, which it deems “less sophisticated” than larger clients.

Staff were advised by the bank to levy an “added value” (AV) charge of up to 1.5% per trade on small and medium-sized businesses, with sales of up to £25m a year. This can be raised further if approved by a manager, and is not disclosed to the client.

Banks make money from foreign- exchange deals in several ways. They can profit from movements in exchange rates, and the difference between their buying and selling rates. Also, they often charge a processing fee, which can be £15 to £25 per transaction.

Many advertise that there is no commission. “They give you an overall cost so the customer has no idea what the bank has made out of them . . . it’s a murky world,” said Alex Hunn, chief executive of FreemarketFX, which charges a fixed 0.2%.

The guidance to Lloyds traders says: “Small corporate clients will generally trade in low volumes and margins will be, in general, higher than those charged to financial institutions.” Experts believe the hidden charges are not exclusive to Lloyds. The news spurred Anna Soubry, small business minster, to call for more transparency in the banking sector.

Small businesses are routinely taken advantage of by banks and brokers
Punch Maughan, holiday lettings boss
Lloyds said its fees were set to “reflect the full cost” of serving a particular market. “We set maximum standard fees; our typical margin is less than 1% for our small business customers,” it said.

The bank added, however, that it would review its guidance to employees.

Some critics feel there could be a case for legal action. “We have been approached by business owners and charities who are concerned that they might have been ripped off,” said Damon Parker, head of litigation at the law firm Harcus Sinclair.

“The fees are potentially recoverable if clients were told that there were no fees but were charged anyway,” Parker said. “Foreign exchange is the largest traded market in the world and more than 40% of the global trading volume happens in Britain, so the potential size of a group claim could be substantial.”

Harcus Sinclair is already acting for investors who are suing Lloyds and its former directors for alleged destruction of shareholder value after the acquisition of HBOS in the financial crisis. Whether there is a currency case to bring forward is unclear. Small firms are now preparing to ask their banks just how much they may have been charged without their knowledge.

“This is clearly another example of misconduct by the banks in their dealings with smaller customers,” said Jeremy Roe of the lobby group Bully Banks. “They have repeatedly taken advantage of the customers’ lack of financial resources and acumen to optimise profits.”

The good news for any potential claimants is that a “litigation funder” is on standby to back those who seek damages, in return for a cut of any payouts. Such funders have continued to sprout since the financial crash, which saw thousands of small firms caught in scandals like that of the mis-selling of interest rate swaps.

“We are seeing an increasing number of cases brought by companies, shareholders and individuals against banks,” said Neil Purslow, chief investment officer of Therium Capital Management, the litigation funder willing to back currency claims. “Over £0.5bn was invested in the litigation funding industry last year alone to help fund the rising number of disputes.”

He added: “Litigation funding clears the path for SMEs to get access to justice in the way that big corporates can.”

Abhishek Sachdev at the adviser Vedanta Hedging said currency traders’ practices had worsened. “We come across small businesses weekly that are routinely taken advantage of by banks and currency brokers, who are charging very significant and hidden profit margins . . . we have seen the currency fluctuations caused by Brexit fears as another reason for them to try and charge more,” he said.